Your Cart Is Empty.

*Only one coupon per order

Due to high demand of our handcrafted product and our current measures to protect the safety of our employees, please expect delays in processing and delivering of your order. We are working diligently to do our best to meet all of your needs.

About Us Original History

It was another muggy Lowcountry night a whole lot of years ago...

...and weary riverboat captain Joshua John Ward found himself frustrated once more, failing yet again to get a peaceful night's sleep. "Cap'n Josh," as he was widely known, ferried rice and other cargo from South Carolina's inland plantations to port in coastal Georgetown, just south of his home in the popular resort town of Pawleys Island. So he spent a lot of nights out on the water, and the grass-filled mattresses common on working boats back then only seemed to amplify the steamy summer heat. 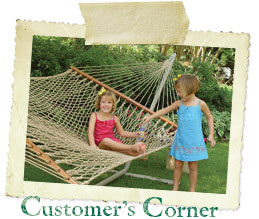 Out of desperation, Cap'n Josh figured he'd give sleeping in a hammock a try, though that option didn't bode much better for him, as he was certainly well aware.

By Cap'n Josh's time in the late 1800s, sailors had already been using hammocks for beds at least since the days of Columbus (who often gets credit for "discovering" the hammock, too, after taking a load of New World hammocks back home with him to Europe). First the British Navy had adopted the practice, followed by many European and American commercial ships and, later, the United States Navy as well. However, those hammocks were small, hard to get into, cramped and prone to tipping.

They were also made from canvas, which meant they felt rough, and were hot – sweaty hot. Some improvement.

So Cap'n Josh's mind soon gravitated instead to rope hammocks, which he figured had to allow more air circulation around a sleeper's body, and thus cooler sleeping. However, rope-hammock design of his time produced something that was likewise coarse against the skin, and also wasn't all that sturdy. Not to mention it had bulky knots tied throughout.

Nineteenth-century rope hammocks were, to put it mildly, uncomfortable for sleeping – and could lead to a very rude awakening if the poor-quality hemp or manila rope common back then ever gave way.

So Cap'n Josh began some experimenting, bent on creating a strong rope hammock that didn't require knots in the hammock body, and one that was wide enough for more stable, more peaceful rest. It took him several tries before he hit upon his winning formula: heavy cotton rope in a double-latch weave, where individual ropes pull against each other to produce a lattice-like design.

But the enterprising riverboat captain's greatest contribution to the art of hammock-making has to be his invention of the spreader bar. Cap'n Josh took staves – that is, slats – from wooden oak storage barrels and sawed them to his selected size, boring holes in them at equal distances apart. He then fed the rope ends from a standard mariner's clew knot through the newly bored holes, tying each threaded rope to a looped end of his woven hammock bed. This way, the only knots were away from the hammock bed itself.

The two spreader bars held the hammock bed wide, the cotton made it soft and the heavy rope and double-latch weave kept it strong and secure.

There's no record of how Cap'n Josh's sleeping changed following his handcrafted success in hammock-making. But we're pretty confident things improved dramatically for him, since the Original Pawleys Island Rope Hammock is not only still with us to this day, but is now possibly the best-known hammock brand in history, long ago having become the template for the classic American hammock style.

Other than some improvements in materials through the years, the basic design of today's Pawleys Island Original is truly little changed from the time of Cap'n Josh. We're indebted to him for getting it right to start with, and we feel honor-bound to carry on his exceptional tradition of craftsmanship and quality.

The Original Hammock Shop, begun in 1935 by Cap'n Josh's immediate family to better market the hammocks they were already selling, is still going strong today along the main road through Pawleys Island, South Carolina. When the shop first opened, it was among the only businesses in the sleepy Southern seaside town. The rope bodies of many Original Pawleys Island Hammocks available there are still woven right onsite; however, before one of our hammocks is complete, it must also be fitted with spreader bars (today we use lovely varnished white oak), a hand-woven clew knot (the attractive rope triangle at both ends of most hammocks) with a spray of harness ropes, and weather-tough hanging chains and O-rings (ours are among the heaviest, and safest, in the industry). Each hammock must then pass a final physical inspection at our coastal Carolina workshop to ensure strength and quality.

And that's as it should be. Because if today's Original Pawleys Island Rope Hammocks didn't live up to Cap'n Josh's own incomparable tradition, we'd be losing a lot more sleep than our ferry-boating founder ever did before inventing the modern relaxation standard more than 130 years ago.

How many great inventions have come about just because somebody couldn't get a good night's sleep? That's the story behind 19th-century riverboat captain Joshua John "Cap'n Josh" Ward and our Original Pawleys Island Rope Hammock.

That pretty little metal tag that says it's an Original Pawleys Island does not go on until certain high standards of quality have first gone in, from our selection of exceptional materials to the artistry of their assembly.

Whether it's your first time seeing a master hammock weaver at work, or your hundredth, the fluid rhythm of hands and rope is positively hypnotic.